It’s finals week here on campus (and at most colleges)! You can definitely tell up here on campus. I feel like everyone is at the point where they are just so done with the semester, and I am right there with them. I love Muncie, and I love being at Ball State, but I’ve been going so hard at it since August, and my body and mind is just exhausted.

As if finals itself wasn’t bad enough, I woke up last Monday and my left ear felt full. I didn’t think much of it. I just assumed it was the changing pressure as I knew there were storms coming in that week. It persisted the next couple of days. But on Thursday, I woke up with a fever, headache, earache, and my throat was sore. Something was seriously wrong. I felt miserable the whole day, but I also had classes the whole day. After my classes ended at 3:15, I walked back to my room to put down my backpack and grab a couple other things. Then I walked over to the health center on campus (there’s also a hospital right next to, possibly even on, campus, but that is an official hospital). The health center is a free clinic available to students that does most basic examinations and can even prescribe medications. By this point and based on my symptoms, I had narrowed down what might be wrong to three options: 1. Ear infection (most probable), 2. Sinus infection (due to the headache and sore throat could be drainage of the sinuses), or 3. Strep. The health center requires appointments, but since I went in close to closing time for them, they were able to see me that same day. The doctor examined my vitals and then asked me some questions to help diagnose the problem. He asked if I had been swimming, at high altitudes, or if I had a cold recently. He left for a while and came back and basically told me, “You have one of the smallest ear infections possible, due to this minuscule amount of fluid in your middle ear. Your body should not have reacted as intensely because there shouldn’t be enough for all the pain and symptoms.” (My body is just weird). SO he prescribed me an antibiotic and sent me on my way. The ear infection was exactly what I had expected.

So in the midst of preparing for finals, I had to deal with the fact that I felt pretty miserable and exhausted. Honestly, this past weekend, I hardly left my room, unless it was to get food, or some other small menial task. I slept a lot, but I also did my best to be productive as well. I listened to and wrote about a podcast talking about Supreme Court cases (the response was supposed to be one page, and I ended up ranting and made it two and a half. Oops). I also spent two hours preparing flashcards for one cumulative final, wrote my last paper as a freshman in college, and familiarized myself with the summary of a book. Both last week and this week, my weekly to-do list was around twenty items (on an average week, it’s usually around 10).

It’s just a stressful time of year. Everyone in any type of education just feels ready to be done. Where last semester I had a ton of papers and projects, this semester I have one project for a final, and everything else is an exam. I have five finals in four days, four of those finals are tests. If you clicked on this from any social media site, my caption is the summary of my week. But in case you missed it, it’s “5 finals. 4 days. 3 cumulative tests. 2 online in a testing lab. And 1 final on Friday that prevents me from coming home early.”

But in this chaos, I’m not really stressed. I mean, I kind of am, but I always get stressed right before finals. I feel more overwhelmed than stress honestly. I just have so much to do before I can go home (I haven’t even started packing yet!) that it just zaps all my energy. My to-do list is probably the biggest thing keeping me going right now. I focus on concentrating on getting one thing done at a time, knowing that I will have the opportunity to (more or less) relax when I am home for the summer. Obviously, that’s not entirely true since I’ll have my internship; but the internship probably will not last longer than 3, so I have afterwards and weekends to relax and do more things of what I enjoy.

For those of you already dealing with or about to deal with finals, make a to-do list. It helps keep you organized and on task. Treat yourself only after you’ve accomplished something on your list. Even then, don’t make it big. Watch one episode on Netflix, or read 1 chapter. Use stuff you enjoy as a reward, but don’t make it equal or longer to the time you spent studying or writing papers. Find some time to unwind, but don’t do it so much that you lose momentum. Honestly, one of my favorite rewards for myself is a shower, especially if I’m working later at night. I love showering before bed, and I make myself finish whatever I’m doing before I can go shower. I’ve conditioned my body to know that late showers mean bedtime, not work time. There’s something so relaxing about showers. But I always wait until my work is done before I reward myself.

Finals are rough. Anyone who says differently probably hasn’t had to take them. They cause so much stress, and I know you just want to be done. That’s where I’m at now. But I also know it’s almost over, and that makes it worth it. 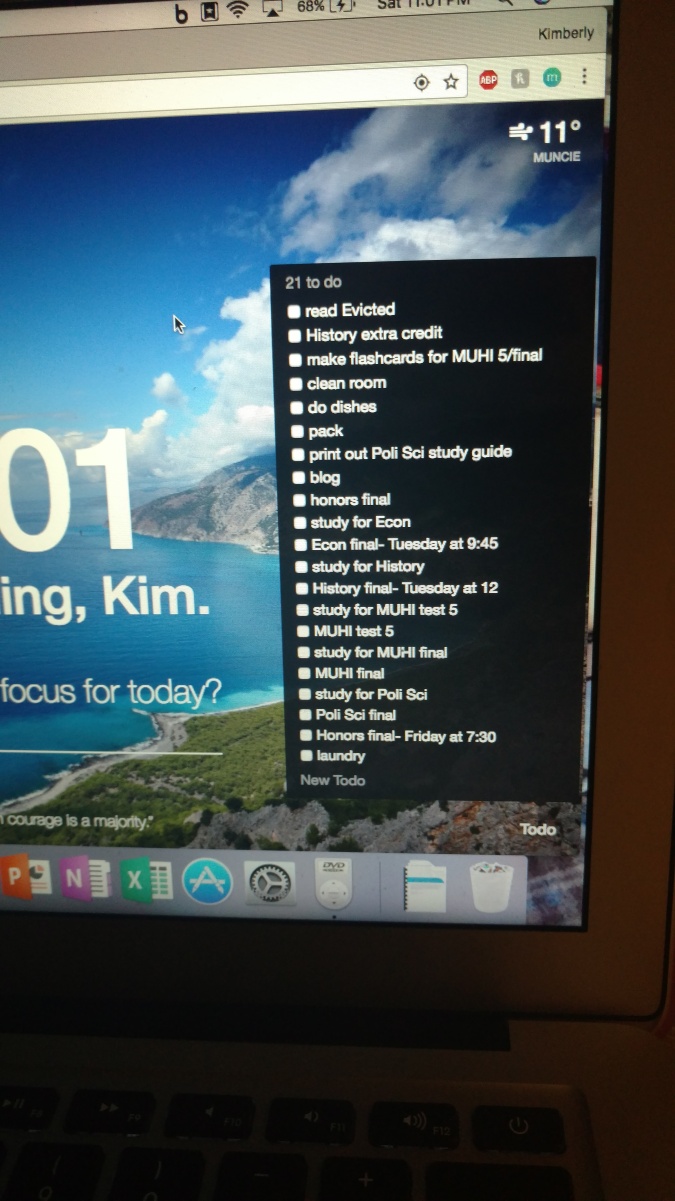 One thought on “Finals”