I don’t know how much you listen to country music, but there’s a pretty popular song out there by Thomas Rhett called “Life Changes”. It’s super cute and talks about his life story. But I really like the chorus. A couple lines say “You never know what’s gonna happen. You make your plans and you hear God laughin’.”

Those two lines are really what I want to focus on today. 2018 has brought about so many changes to my life. I made plans, and those plans have been upended time and time again. I could never have imagined where I would be without those plans changing. I worry and I plan. I have gotten so much better, but that’s still something I struggle with.

One of my goals for 2018 was to let go of/handle stress better. I was kind of forced into handling things better because I have had so much come up this year. Some of it has been good, and some has been bad. But a lot of what I have experienced has been stressful. So because of that, I have had to learn how to handle it better. Before this year, I was so bad at handling stress. Even the smallest thing would set me back for minutes or even hours. I’m by no means perfect. I still have my setbacks, but I look back at the progress I have made this year and I’m so proud.

But what inspired this post is something that happened over the weekend. I was doing my dishes on Sunday night and got a message. Instead of moving away from the sink, I just held my phone over it to respond. Well, being the klutz that I am, I dropped my phone in the sink that was full of water. I pulled it out as quickly as possible, and at first there seemed to be no damage. But then later, it wouldn’t charge and my speaker wasn’t working. I panicked a lot more than I should have, and it really freaked me out. Like any millenial, my phone is important to me. I use it for my alarms and obviously to keep contact with people. I should also mention that my phone is only about two months old. I then turned my phone off and put it in rice overnight (thank goodness we actually had rice in the apartment!). I had it all planned out for what I was going to do if my phone was not going to be working the next day. Fortunately, it turned on and was able to charge. At first my speaker wasn’t working, but that eventually came back as well.

My humiliation can also be a lesson. I was so worried and so stressed over something I had no control over. So it goes to show that I’m still working and learning. But I have another story over the weekend of how I handled my stress better.

So on Friday and Saturday, my roommate and I had some friends over for Christmas at our apartment. Well, Saturday, I was about to make homemade cupcakes (may post the recipe for those at some point), when I couldn’t find my cupcake liners. I looked in all the cabinets and even in the fridge. I couldn’t find them, and I had already thrown my receipt away, so I had no proof if I had even bought them. I asked my roommate if she had seen them (she hadn’t) and searched for them. But once I had determined they were nowhere to be found, I ran to Walmart real quick to buy some more. No harm, no foul. Cupcakes all got made, but I never found my original cupcake liners.

Going back to the “Life Changes” song, the very next line of the chorus says “But I wouldn’t change it for the world.” I relate so much to these three lines of the chorus that I have mentioned. I never know what a day is gonna bring. I can plan all I want, but very rarely do my plans ever come to fruition. But looking back on my upended plans, I find that they often work out for the better.

Let’s use an example. I did not plan to be a history major. Social studies ed, yes. History by itself, no. But I got an email this semester from my advisor saying that I could double major without extra work. Because I had not looked into that, it really stressed me out to the point where my advisor pretty much forced me into signing up for a meeting with him (if you know me, you know that I hate conflict. I’m fine with one-on-one friendly chats, but I tend to “nope” out of stressful interactions). Anyway, I was pretty stressed about this meeting because I didn’t know what to expect with the major. But my advisor was patient and answered all my questions, and suddenly it was making a lot more sense. I didn’t plan for this to happen, but I’m eager to see how it plays out for me.

My life is constantly changing. I’m not the same person I was in January. Honestly, I’m not the same person I was in June when I chopped off 13 inches of my hair and got bright pink highlights. And I’m glad for that. I’m working, learning, and improving. Some days I succeed, and others I stumble and fall. I have come a long way this year, and I’m so proud of who I’m becoming. So yeah, my life changes. But each change in its own way, is shaping me into the best version of myself. Maybe one day, I’ll stop stressing and planning as much. 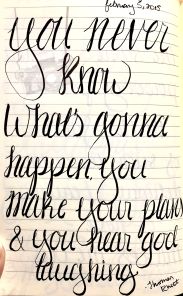 I'm a social studies education and history major at Ball State University just writing about life and hoping that other people can use my stories!